What WandaVision will bring to the Marvel Cinematic Universe…

Phase four of the Marvel Cinematic Universe is one with excessive excitement, and the most unanticipated of events will take place in the movies to come. We know what you’re thinking: But isn’t Vision dead after Thanos ripped the Mind Stone out of his forehead at the end of Avengers: Infinity War? How’s that going to work? We at Swag Shirts are excited to find out like you are, and in the excitement that is to come with movies like WandaVision, we have already created amazing merchandise for you to buy from the Swag Shirts online store in India. Select from our best prints of WandaVision t-shirts and amaze people by telling people what a big fan you are of the Marvel Cinematic Universe! 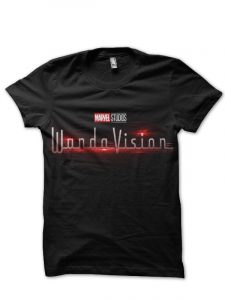 Between Spider-Man: Far From Home and Doctor Strange in the Multiverse of Madness, we know that the concept of the multiverse is real in the MCU, so that offers one potential explanation as to how exactly WandaVision — and many other series and movies, for that matter — fits into the wider MCU. And we are glad this ever-expanding universe that has been built with the amazing characters that are portrayed. This way, we can keep collecting the best of Marvel character t-shirts for ourselves from the Swag Shirts online store. Easily customizable in any color & size, Swag Shirts give you the option of choosing even the necklines that you want. Even better, you could get your name printed on the t-shirts to show your love for WandaVision or any of the movies in Marvel Cinematic Universe!

WandaVision has ties to the Doctor Strange sequel, namely that Scarlet Witch will appear in the movie, the TV series might debut shortly before the film does. That means we can likely expect WandaVision to arrive in mid- to late-April 2021. But fret not, this is the time to start recapping all that you would have missed in the movies before, and start building up your energy & excitement for WandaVision. And finding out the prints that we want for our wardrobe from Swag Shirt’s amazing collection of Marvel Cinematic Universe prints on the online store.

The show will also have to solve the very tricky problem of actually bringing vision back to life. He was killed by Thanos, pre-snap in the final act of Avengers: Infinity War, so its gonna take some finessing to figure out how to revive him. Maybe Tony Stark had an extra version of him backed up on a hard drive somewhere? We can only contemplate what the Marvel Cinematic Universe will bring for us, but we are damn sure we should stock up our merchandise from the Swag Shirts online store in India. We wouldn’t want to get too late & run behind in the race now!